Home alone: Advice for bird-sitters and those who hire them 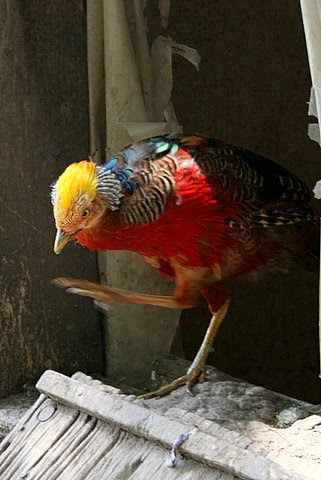 Dear Chicken Lady,  How do you ever manage to leave the farm? Isn’t there a lot to do to get ready? We’re hoping to take off for a few days and I’m afraid I’ll forget something important. Any last minute advice? Sincerely, Itching To Get Away
Dear Itching,  It’s true, we don’t leave often and we don’t leave for long, but once in a while you gotta get away. You are asking the right professional for advice since the novice chicken farmer who leaves on vacation almost always makes the clean underwear mistake. Remember your mother always said to be sure when leaving the house to have clean underwear with no holes (in case you end up in the hospital of course)? The fledgling chicken farmer applies that philosophy to the rest of trip preparation. All those odds and ends you have been putting off until tomorrow you will try to get done so everything appears spotless with cages all cleaned and water dishes all scrubbed. There is no way you can get everything caught up and if you try, you’ll be as frazzled as a hen in a pen with lots of men.
That said, there are some things you do want to accomplish to help that paraprofessional you have coming to your aid. The door latch that keeps popping open and you have to chase the escaped birds back in on a regular basis? Your bird sitter won’t know who goes back in the pen or who runs free so it must be fixed before you leave. Have a few clean empty pens with feed and water dishes if birds need to be separated or isolated since it is spring and love is in the air. You are guaranteed to have some duck drakes fighting with one ending up needing a place to recover, or roosters that need separating.
That hen running loose in the barn who hasn’t been seen for 21 days will reappear with 10 or 15 adorable chicks so you need extra feed and water dishes for them. Mark the cage of the rooster who is nice to you but not so nice to strangers and show your apprentice how to feed the ornery fellow without unpleasant consequences. (I like to put that kind of bird in a cage I can open from the top as they are less likely to attack something coming at them from above.) Set out extra light bulbs, show the helper where the fuse box is, and leave extra food for the cat since a possum will probably show up to eat whatever you had out for the kitties.
Opossum waiting for the kittens to be fed.

If something can go wrong, it most likely will so you try to cover all possibilities. Temperatures below freezing? Have an extra hose handy since an inexperienced helper may not get the hose drained completely and it will be unusable until they haul it and thaw it in the barn. Leave them a roll of duct tape, some wire and wire cutters, and phone numbers for everyone you know that they might need help from.

I am always afraid our helper will forget a bird pen or two so we mark each door with fowl inside with some bright colored duct tape and make out a detailed list (with extra copies) of every poultry perch that they need to check. Since we feed different birds different feeds, label the feed containers, and label the pens for how much to feed the occupants. We had a helpful relative take care of the birds once and he felt if a little feed is good, a lot is better which while we know that is not so, your helper may not. Be sure to have plenty of feed on hand so you don’t have to run to the store the minute you get home for more if your helper turns out to be the “more is better” kinda person.
Go ahead and pick up empty feed sacks, toss out old eggs, throw away the tarp the geese chewed up and put out fresh straw while you are going around double checking everything and you will feel wonderful about all you got done. If the head honcho decides he wants to build a new pen at the last minute and get everything done that he hasn’t finished in the past year just let him have fun and you go get a good night’s sleep.
The worst disaster that happened while we were gone was a result of visiting opossums who killed two pekin duck hens every night while we were gone from the pen where we had all our breeding hens. We were left with one old one who laid no fertile eggs that year and it was a few years before we were able to find some good enough to replace those we lost. The poor guy helping out was very sorry but there was not much he could have done. He closed the birds up every night but apparently the possum was in the cage before he put the girls in. He did say the ducks didn’t seem to want to go in but managed to pen them up anyway where they met their doom. One possum met his end when he sauntered into the trap we set when we got home and a few more joined him soon after.
Most importantly, impress on your eager helpers how much you love those birds and how sad you are to leave them. Let them know they are privileged to be able to spend so much time caring for them and if they do a good job you may let them come again. Also be prepared to pay well, for once they have spent a few days slipping and sliding in the mud, their joy in the job may be in short supply. It seems that telling them it is good agility training has little positive effect.
Then, in the final hour before you leave, throw a few things for yourself in a bag, grab some extra chocolate and go have fun. If you forget your toothbrush, pick one up on your trip and don’t feel bad that you put all your energy into getting the birds ready before you left. Bruce Schimmel said “The little furry buggers are just deep, deep wells you throw all your emotions into.” Substitute feathered for furry and you have described yourself well.  Sincerely, Chicken Lady