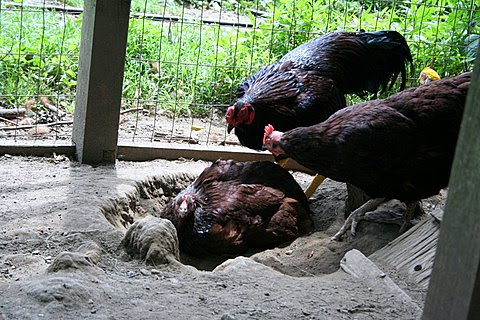 Chicken Lady
Dear Chicken Lady, So we’re building a chicken coop and have some old windows we want to use in it. Will they be safe to use or will the chickens crash into them and break them, leaving sharp slivers of glass to be cleaned up? I mean, surely the chickens would like a nice view and some sunlight coming in wouldn’t they? Sincerely, Let the Light Shine In
Dear Let It Shine, Chickens are not noted for their sharp vision, unlike the birds of prey or even the pigeons who have been described as a pair of eyes with wings. We’ll save the discussion of whether or not a chicken would like a window to gaze out of for a later discussion and go straight to the use of glass in a chicken coop. Our coop has old house windows that have held up to conditions for the almost 20 years it has been around. Of course, they have a sturdy wire screen in front of them so when they are open the birds can’t fly out and predators can’t come in. They are high enough off the ground that birds who fight wouldn’t normally crash into them either. Having windows that open is a luxury option so a far simpler way to let the light in is a sheet of something clear or translucent covering a hole in the wall. Now some will tell you to use only safety glass or plexiglass and others will say “It’s a chicken coop, don’t lose sleep over it.”
We have sheets of safety glass that we use to cover pens that would get little light otherwise that have also lasted for years, and some that have not done so well. They are tempered glass, that shatters in to smaller rounded pieces rather than the sharp slivers that regular window glass breaks into. When they have broken, we have shoveled up the broken pieces, dirt and all in fear that the birds would peck at it, swallow it and die from interior lacerations, a fear that few chickens are smart enough to lose any sleep over. After all that work, we noticed an old pen that hadn’t been used in a while had it’s glass ceiling shatter and the pieces had sifted down into the dirt below. It has been one of the birds’ favorite dust bath spots as it is always dry, with the birds taking baths and probably pecking at the pieces of glass for several years with never any unusual problems stemming from it.
Broken glass is not a good way to kill anyone, chicken or human contrary to popular folklore. The pieces of glass if eaten by the birds are probably ground smooth by the other rocks the chickens keep in their crop to grind food. Even people aren’t easily killed by eating glass. If you could get someone to eat sharp shards of glass, they may do some damage which would send you to a doctor for treatment but we tend to not enjoy eating hard gritty things like ground glass and would not easily be persuaded to include them in our diet.
There are kinds of glass that might to too sharp and hard for even a chicken’s crop to handle. Pyrex cookware is formulated to very hard and resistant to shattering. There are two kinds of tempered glass, the common cookware we use being made with a soda lime composition and the older and more thermally strong variety made with borosilicate glass. The soda lime glass is stronger if you drop it while the borosilicate can take thermal shock better. When they do break watch out for they shatter into thousands of tiny incredibly sharp slivers of glass. These pieces of glass are so sharp that when John was in school, slicing up tissue to look at under the microscope they used glass shards to get thin translucent slices of tissue.
Borosilicate glass is used for all sorts of things from aquarium heaters to lenses for telescopes. The glass for the telescope mirror at the California Institute of Technology was cast in a block that took a year to cool before they were able to work it. It is used in dental cartridges, pre-fill syringes, for the thermal insulation tiles on the Space Shuttle and lenses for high quality flashlights. Specialized marijuana and tobacco pipes use it as well as glass guitar slides. The glass beads so popular at the craft shows are most likely borosilicate glass and those High-Intensity Discharge lamps in our barn also have the borosilicate glass.
The law of unintended consequences was noticed when Pyrex cookware switched from the borosilicate formula to the soda lime glass. The switch was for several reasons, among them cost and environmental concerns but caused great consternation among crack cocaine producers. The production of crack requires heating cocaine and water to a high temperature and then cooling it rapidly. Once the switch to lime soda glass was made the crack producers could no longer buy their glassware at the local Dollar store but were forced to resort to stealing vials and beakers from labs who still used the more thermal shock resistant borosilicate containers.
To answer your question, go ahead an recycle those old windows which are far more likely to get broken by some klutzy accident you have than a chicken crashing through it. We clean up broken light bulbs from the brooding cages, find broken glass surfacing in the garden from bottles tossed out long before we ever moved to the farm and have never lost a bird to the broken glass that we know of. Sincerely, Chicken Lady

3 Responses to Windows for Chickens